What I know now~No Mammograms~!~

Do you have implants?
Have you been sent for a mammogram?
I was sent for a baseline mammograms(mammos) after my mother was diagnosed with breast cancer in 2001. I can remember when I had worked as a scrub tech for a plastic surgeon in the 90's the surgeon I worked for went to a conference and said there was a discussion on should women with implants have mammos? My co-worker and I waited for the answer, but even he could not give a definitive YES or NO.  As I was sent for my first mammo, I thought back to that conversation and I asked the tech, "Since I have implants should I be getting a mammo?  She assured me they do mammos on implant patients all the time and it is fine. She even joked with me and said, I haven't ruptured one yet. So, I giggled and trusted what she told me, after all this is her job and she is a licensed mammo tech.  I  also thought to myself, the radiologist certainly would not want to rupture an implant. So, I consented
I wish I would have known then, what I know now~!~
My surgeon, Dr. Susan Kolb in Atlanta, GA is an expert in implant sickness and reconstructing the breast after implants.  SHE WAS SICK FROM BREAST IMPLANTS TOO~!~ Which is what helped to become an expert in Biotoxin illness, Silicone Dysfunction Syndrome, Fibromyalgia and more. She found the answers as to why this happens to women with implants. There is way too much info to put here so I will add some sites to the comment section.
Dr. Kolb and approximately 30 other Plastic Surgeons that I can reference all agree that women with implants should not get a mammogram. Instead they should have an ultrasound of their breast  and if something looks suspicious then a MRI.. NOT a mammogram. There are probably hundreds of more doctors who agree with this statement, but my implant support group and I have researched the ones who ex-plant the implants including the capsule along with scar tissue to help start the process of recovering. These doctors also agree these very implants are causing all the illnesses that women with implants suffer from. (symptoms we women and doctors do not piece together until it is too late, that topic is next :see next blog, coming soon).
Just getting the implants out is not all that is involved. The longer the implants are in the more damage they cause. Since mine had mold in them and one ruptured inside of me, my whole body has mold and parasite causing all kinds of damage and guess what ? They are so small you can not see them until there are way toooooooo many. Here is why I hold the radiology team and the facility where I had my mammos done for so long responsible for not telling me what they saw. 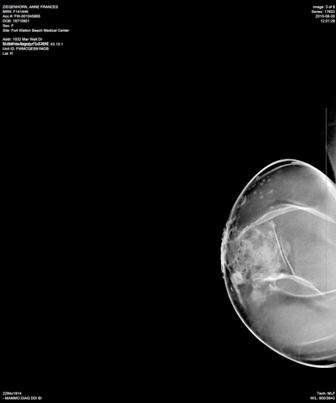 that cloudy swirl.....mold organisms swimming  Do you think the Radiologist and the facility I went to all these years should be accountable for not disclosing?          PLEASE Share my blog and comment~ 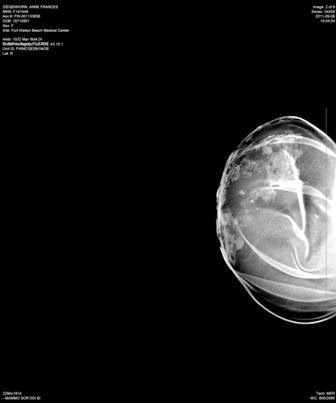 cloudy film of mold spores I wonder how many millions it takes to show up on film?The dots are the ones settling on the implant and you can see the weakened silicone shell breaking down

I was never shown my mammograms after all the years I was sent for them. I had to wait on a written report with only words. ALL of the mammo reports say NORMAL. Had I seen these pictures, I would have searched for answers.   Below is the implants after they came out of me. The right implant  shows a bronze colored fluid(yes the stains of the mold that leaked into my body) the left one on mammo did not have enough mold to see on film, but look at it. Brown, black and white molds. yuck~ 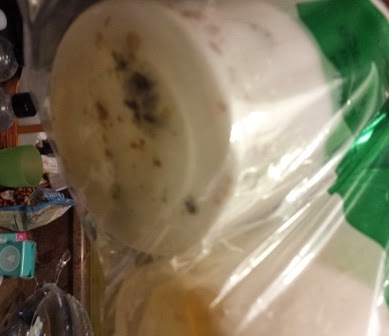